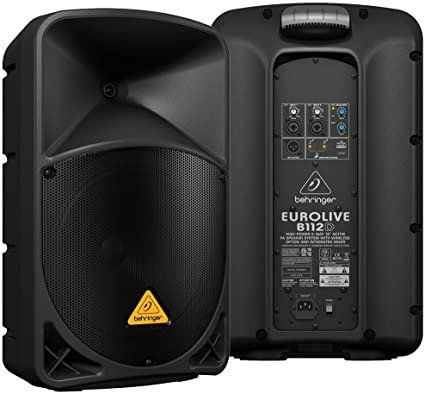 The lightweight and powerful Behringer Eurolive B112D active PA speaker delivers excellent, low-distortion power and state-of-the-art features. Whether you're addressing a small meeting or jamming at a coffee house, the B112D delivers the clean, in-your-face vocals, and rich bass you need to get the job done. You also get high-end features such as a 2-band EQ, active crossover, dual protection limiters, and transducer response correction ensuring that your audience experiences top-notch sound quality. Also, thanks to its switched-mode power supply, the Behringer Eurolive B112D active PA speaker is light enough to nix the roadie and is able to run cool for hours without breaking a sweat! Curious? Check out Sweetwater's Knowledge Base or call your Sales Engineer!

The Behringer Eurolive B112D active PA speaker's LF and HF transducers are designed specifically for each application, ensuring a flawless performance. You can expect massive quantities of low end, with articulate, detailed mids and crystal-clear highs every time you power up the B112D. Toss its 2-band EQ, integrated sound processor, and large-format exponential horn into the mix, and you can be assured that your audience will experience exceptional sound quality in every corner of the room.

Featuring the same low-noise, high-headroom mic preamps as Behringer's mixers, the B112D's integrated mixer accepts virtually any mic/line level signal that you're likely to encounter. You'll be able to use the B112D's variable input gain controls to dial in the perfect level, while its clip LED ensures that your signal doesn't get too hot. You can also use the B112D's link output XLR connector to add more speakers if you really need to pump up the volume. Additionally, the B112D's built-in connectivity with Ultralink ULM-series wireless systems give you high-quality sound, along with maximum mobility. Just plug in a ULM USB receiver, and you're ready to go.

Uli Behringer showed an interest in music technology design at a young age, building his own synthesizer by the age of 16. In 1982, Uli began studying sound engineering and classical piano at the Robert Schumann conservatory in Dusseldorf, Germany. Uli's defining moment came when he was repairing a signal processor made by a high-end manufacturer. Despite the processor's expensive price tag, Uli realized that its internal components could be bought for a fraction of the cost. Being a strapped-for-cash student, Uli began building his own signal processors. Before he knew it, other students began requesting equipment from him. In 1989, after being bombarded with more orders than he could handle by himself, Uli created Behringer, Inc.